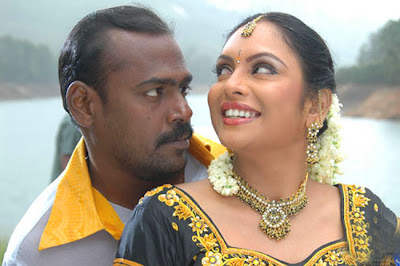 After Karuppasamy Kuthagaikarar, director moorthy attempts a comedy movie with a touch of sentiment in Vedigundu Murugesan. The light hearted comedy by both Pasupathi and Vadivelu definitely adds to the value of the movie and makes it watchable.
Vedigundu Murugesan (Pasupathy) is a do gooder who gets into little trouble now and then and escapes because of the kindhearted judge Nirmala Periasamy (popular TV anchor). Jothirmayee is the constable who is given the task of taking him to court everytime. Love blossoms between the two.

Murugesan also takes care of a mentally disabled Ponni and when Kodanchan (Raneesh) takes advantage of Ponni, Murugesan beats the ganster. When Kodanchan is killed by accident and the blame falls on Murugesan. Kodanchan’s brother is also out to get his revenge on Murugesan which leads to the climax.
The scenes where Vadivelu appears definitely is hilarious and enjoyable. Pasupathy also adds to the comedy with his usual ease. Jothirmayee can improve on her dress sense. Vedivelu’s Alert Arumugam will be remembered for a long time to come. Dhina’s music adds to the movie’s appeal with the folk tunes.
Cast: Pasupathy, Jyothirmayi, VadiveluDirection: MoorthyMusic: Dhina
Posted by sankar at Monday, July 20, 2009