Pa. Ranjith is an acclaimed director, screenwriter and  who predominantly works in Tamil cinema. The director has also ventured into film production by launching the banner Neelam Produclions, the company that bankrolled the critically acclaimed 2018 hit Pariyerum Perumal, directed by Mari Selvaraj.
The director has announced his next project as a co-producer on April 19th 2019. Pa. Ranjith took to twitter to reveal information regarding his second venture as a producer. The film will be directed by debutant director Suresh Mari and produced by Neelan Productions in association with Shraddha Entertainment.
The film's protagonist will be played by actor Kalaiyarasan, who was last seen in the K.M Sarjun-directed Airaa. 'Chennai-28' fame actor Aravind Akash has also been roped in to play a crucial role in the film. Pa. Ranjith will be helming the biopic of tribal leader Birsa Munda. Stay tuned for more updates
Posted by sankar at Friday, April 19, 2019 2 comments:

SURIYA & KARTHI GEAR UP TO CAST THEIR VOTES

Actors Suriya and Karthi was spotted today at the line of a polling station in Chennai, waiting to cast their votes for the upcoming 2019 General elections. The actor-sibling duo have taken a break from their busy schedule to exercise their democratic rights. 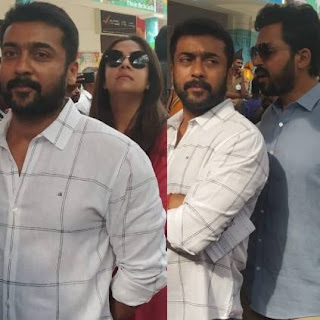 The actors were seen accompanying their spouses to the polling booth. Actress Jyothika tagged along with actor Suriya to cast her vote.
On the work front, Suriya will be seen in the upcoming film NGK, which is gearing up for a May release and will also be playing the lead in the K.V Anand-directed Kaappaan. Actor Karthi has commited to a slew of projects which includes the Lokesh Kanagaraj-directorial 'Kaidhi' and an untitled project co-starring Jyothika and directed by Jeethu Joseph
Posted by sankar at Friday, April 19, 2019 1 comment: